5 Year Member
So what is thier origin? I feel I am missing something.

Very nice dwarfs by the way.

5 Year Member
"Zaire" is the old name for Democratic republic of Congo.....
These are from the Congo side of Lake Tanganyika.....
They are the prettiest form of brevis in my opinion....and quite different to most other varieties
Hence the discussion as to why!

5 Year Member
They are very nice looking. They are one of the prettiest forms of Brevis I have seen.

just that it is a possible reason why some variants of brevis have traits that are very different to others
Click to expand...

Rod, you are quite likely right, but the reason that some "brevis" have traits that are different from others is that they are a different species, and that each form is not necessarily particularly closely related to the other forms of "brevis". Only DNA analysis can pick these cryptic species out.

say L meeli males sperm accidentially fertlises a brevis female eggs some of the fry have the white stripe on the tail....and over the next 100,000+ years that trait is passed through that particular population and at some point the whole population carrys the trait......they are 99.9% brevis with one trait that evolved from an accident
Click to expand...

This where it all goes slightly wrong, but only because you need to get away from using their current names. The scenario is quite likely, and as you say a number of species are stabilised hybrids, but in this case what you suggest is that current species brevis "Zaire", "brevis" and "meeli" share a common ancestor, but not that that the two species that hybridised were L. brevis and L. meeli, they hadn't yet evolved from that common ancestor.

Have a look at this link for a better explanation, and also why there are so many species of shell using cichlid (and you are right accidental hybridization does seem to be the most important factor): <http://biosearch.berkeley.edu/index.php?action=submit_search&q=pmid:17254340 >

......From the direct observation of hybrids we conclude that hybridization between distantly related gastropod-shell-breeding cichlids of Lake Tanganyika follows inevitably from their ecological specialization. Moreover, the observed incongruence between mtDNA and nuclear multilocus phylogeny suggests that repeated hybridization events among quite distantly related taxa affected the diversification of this group, and introduced reticulation into their phylogeny.....
Click to expand...

5 Year Member
Hi Darrel
Thanks
You're right I shouldn't have used names of current species.....I should have used species A and species B
I'm NOT saying that Zaire is a result of meeli x brevis.....just that this "type" of scenario is possible?
It's obviously a subject you're into.....I wonder if th variants will eventually be classed as different species...or sub species?
Regards Rod

5 Year Member
"Taxonomy is the diaper used to organize the mess of evolution into discrete packages" - Mike Sandel (evolutionary ecologist and new dad).


Rod said:
... I wonder if the variants will eventually be classed as different species...or sub species?
Click to expand...

Taxonomy is the diaper used to organize the mess of evolution into discrete packages
Click to expand...

Very true, cladistics and phylogeny have made things a bit clearer, but it all taxonomy is a bit of a pigeon holing exercise, and taxonomists will always differ in their view of how big the pigeon holes are, and on where the boundaries of each pigeon hole lie. Once you start adding in conflicting information from nuclear and mitochondrial DNA the picture is even more unclear.

I wonder if the variants will eventually be classed as different species...or sub species?
Click to expand...

I really don't know, this is a quote from the Koblmuller et al paper

Despite the strength of the phylogenetic signal and the high resolution of reconstructed species relationships, the mtDNA phylogeny contains several groupings in striking conflict with morphological, ecological and behavioral similarities. Remarkably, all inconsistencies involve gastropod shell breeders.
Click to expand...

It's obviously a subject you're into
Click to expand...

I am quite interested, it wasn't a subject I knew much about but, I used to work for a Phycologist (I used to sort out her base sequences data files). If you want the back ground to cladistics, you can down-load the classic ""Compleat Cladist" from here: <http://taxonomy.zoology.gla.ac.uk/teaching/CompleatCladist.pdf>. There are also some lectures and bits by Rod Page here: <http://taxonomy.zoology.gla.ac.uk/teaching/>.

I was offered some....but declined...then I changed my mind but was too late!

5 Year Member
If theyre true L.meeli Id be interested some time down the track Rod

5 Year Member
Haven't seen them....in the flesh
but the photo of a parent look similar to this.....

Similar tail pattern to my brevis "zaire"!
B

5 Year Member
Hey Rod,
Nice group of Shellies,
Have you got any of these guys,
Neolamprologus kungweensis 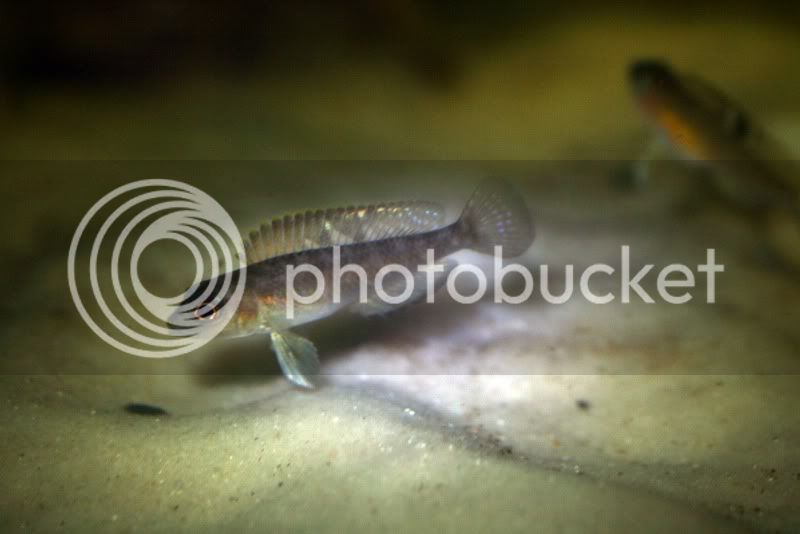 5 Year Member
Their great little fish but at 4cm their best housed in a species only tank.