5 Year Member
It's looking more and more like I have a mating pair, so I've titled this thread optimistically and will post as we go.

The set-up: 29g aquarium with 1 male & 2 female steelblues, plus a few ottos and cories and one lonely rasbora (which will be joining some friends in another tank soon). There are three fairly large pieces of driftwood in the tank, each positioned to form a cave. Temperature approx. 78Ã‚Â°F.

When first added to the tank, each of the fish staked out their own territories and claimed a cave. One of the females (the larger of the two) emerged as the dominant female. The male displayed for both of the females and they both responded favourably to his advances, flaring their fins and displaying their bellies.

After a few days he chose the smaller of the two females (the subdominant female) to focus his attentions on. He was constantly displaying for her and trying to lure her to the cave he had chosen, but she seemed determined to keep the cave she had chosen. This went on for several days. During this time, the larger female still dominated the smaller female.

This morning, I noticed that the male was defending his cave much more aggressively than usual. The only one allowed in his territory was the female he had chosen.

This evening when I got home I saw that now both of the pair were defending the cave aggressively, and that the female was pretty much staying inside the cave, only emerging to eat, chase away intruders (including the larger female), and to try to entice the male to join her. I saw her do a few shimmies & tail slaps, but he was too interested in defending the territory to pay her much attention.

A few pics: Here's the handsome boy. You can see here that he shows quite a bit of yellow on his face and throat. When displaying for the females, his darker markings fade considerably, almost to the point that he looks like an albino.

The females are surprisingly colourful with quite a bit of blue on the face. When displaying for the male the darker markings become much more pronounced and include several dark spots along the back just below the dorsal fin.

very informative , fingers crossed for you

my ?female? is not anywhere near as colourful and seems to stay yellow all the time

5 Year Member
Thanks fishgeek. I'm trying to be as detailed as possible since no one really knows much about this fish.

Both of my females were showing pretty intense yellow colouring in the store, but once I got them home they switched to the blue-ish colour. I keep waiting for the yellow to come back...

5 Year Member
Your steelblueÃ‚Â´s are very beautiful. I really like the colour. This is also the first time I can see a female on picture!
CanÃ‚Â´t helping to think that this have to be a true species! No matter what the experts says . They donÃ‚Â´t look like a crossbreed or a "designed species" to me.
If they would be a crossbreed of two or several species they should look different from time to time. But the steelblues I have seen since early nineties have all looked about the same in size and coloration.

Keeping my fingers crossed! Hope to see some picÃ‚Â´s of the fry soon

Best regards/ Per
A

5 Year Member
Things are pretty much the same today. The pair are still defending their cave and the female is still trying to lure the male to come into the cave with her. Her markings are staying dark and pronounced all the time now, and she's also showing a bit of yellow colouring. The male, however, is still getting distracted by his reflection in the back of the tank. I tried moving some plants into that area, but he's still seeing that "other fish". I think I'll try posting an image of some plants along the back wall -- something busy enough to hide his reflection. I'll do that tonight and see how it works.

In addition to chasing every other fish away from their cave, he's paying special attention to the other female. Both chasing her as far away as possible, until she's cowering in the far corner of the tank, and then turning on the charm and displaying for her. She's getting very confused, poor girl. She is, however, still getting plenty to eat. As soon as he turns his back, she's right back out into the main area of the aquarium, so she's not too traumatized.

amanda what was the hardness and pH of the water?
A

And my boy is officially an idiot. After all the time and effort he put into getting the girl to move into his cave, now that she wants him to join her he just keeps swimming away. I've seen her actually swim all the way across the tank to where he is to get him and bring him back to their cave. She curves and shimmies, and I've seen him shimmy back, but then he gets distracted and swims away again. The poor girl is getting so frustrated. She just keeps swimming in and out of the cave, looking for him.

I put a printout of some plants along the back wall where he keeps fighting his reflection and it seems to have helped, but he's still too preoccupied with the other fish in the tank. Even though they're waaaaaaay over on the other side of the tank.

Maybe he's just too young and doesn't know what to do yet? Has anyone seen similar behaviour in apistos? The female sticks very close to the cave and she is looking kinda skinny -- would they still be displaying mating behaviour like this if they'd already spawned?

5 Year Member
I wish you the best of luck!!!

My female (this thread!) died because of a chase by the two males I (still) have. One was the dominant one and the other just sat around. On a day that I was working they decided to quarel and chase the female. By the time I came home she was exhausted.

But anyway: look at the thread for the female in breeding color! And please keep us posted regarding the successes!

5 Year Member
Looking at your beautifull movie; maybe you should plant the tank somewhat more! Should you get real madness in the tank........
A

5 Year Member
Joost, thanks for the link. And funny you should mention the plants. My tank actually used to look like this, but I just decided to rework it. I took out most of the stem plants, added more driftwood, and planted several baby crypts in the foreground. They will grow and fill in, but I know it's looking incredibly sparse right now. Any stem plants that I kept are just floating (haven't decided where to put them yet). And not two days after I did all this, I found the females. D'oh!

5 Year Member
It is very possible that they already have spawned. I have seen this behaviour in my tank with Ap. Resticulosa (They are closely related to Steelblue). The females seem to encourage the male to defend the territory.
Also since the belly seems empty on the female, I would think that she already have deposit the eggs in the cave.

Be patient and wait for a couple of days, and see what happens.

Best regards/ Per
A

5 Year Member
Thanks for the encouragement Per. I'll keep posting as it happens.

amanda huggenkiss said:
My tank actually used to look like this, but I just decided to rework it.
Click to expand...

That is more my piece of cake!


Mine is looking like this (at the moment with full grown plants and floating ones). 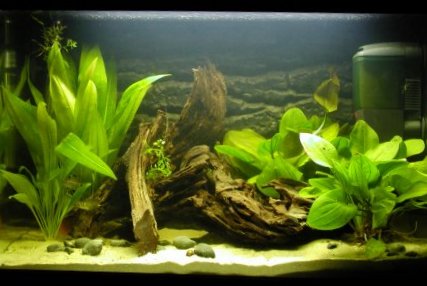 And I found new female Blue Heads today! I'm going for them tomorrow... To be continued.
A

5 Year Member
Yeah, it'll look nice & lush once the crypts grow and it fills in. But more of the plants will be lower with the driftwood sticking up (instead of the old layout where all the stemplants totally hid the driftwood).
A

5 Year Member
Well I've been away for a few days and didn't get a chance to check the aquarium until last night, and I noticed that the male is now ignoring his current mate in favour of flirting for the other girl. And she's responding quite favourably. The other female was still guarding her cave.

Then this morning I glanced in and saw that the first female was no longer in her cave, but was trying to catch the male's attention and hanging out on an upper section of the driftwood. I took a closer look and... I have wigglers! She must have just moved them! I tried to take a pic, but I was in a hurry to get to work and they're in kind've an awkward position lighting-wise. I'll try again tonight.

So if I'm seeing wigglers now, when do you all think the eggs might have been laid?

5 Year Member
Wow! You are (by my knowledge) the first to breed 'Blue Heads' privately!!! Congratulations.
A

I got home tonight and checked the tank, and they were all gone. Not a single one left. And the female was hanging out at the front of the tank, nowhere near the cave. I was totally bummed. And then I noticed a little grey mass in the gravel. She'd moved them all to a little indentation in the gravel @ the very front corner of the tank. Unfortunately, it's an even worse spot in terms of photographing. I'll just have to wait and see where they end up next.

In terms of filtration, I currently have an eheim on this tank. Has anyone had luck breeding with a regular filter? Or should I switch to a sponge (or slap a sponge on the intake)?
A

5 Year Member
You probably were already lucky that the eggs hatched (most of the time in 2 to 3 days depending on the water values). Most of the time they eat the first nests, so....

A regular pump should do fine, but a sponge is 100% safety!
A

5 Year Member
She's moved the eggs yet again, this time onto the first piece of driftwood that she was originally favouring. Everything still looks good -- LOTS of wigglers! She's defending them and fanning them, and even though he's trying to start yet another family, the male is still defending them too. I'm still trying to get a pic, but they're in another awkward area.