Couple of pics of my recently obtained, wild caught Aphyosemion calliurum. They did not come with a collection location, but are most likely from Nigeria, as they came in with other Nigerian killies and cichlids. Young fish about 1" to 1.5" - should be very nice when grown out some. 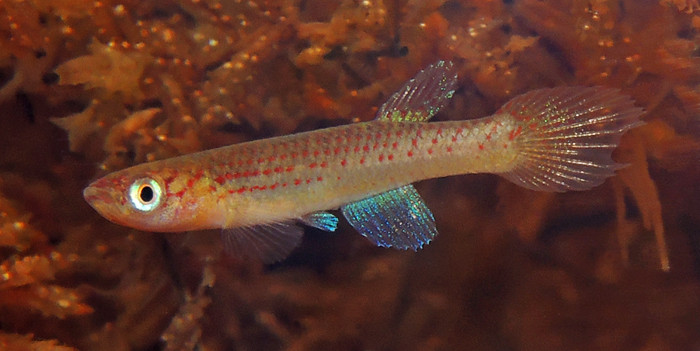 Their body shape is similar to my dwarf golden panchax

Wild male grown out some, from last year. I sold off all my killies last year thinking I was done with keeping them. I put the java moss from their tanks into my dwarf cichlids tanks. 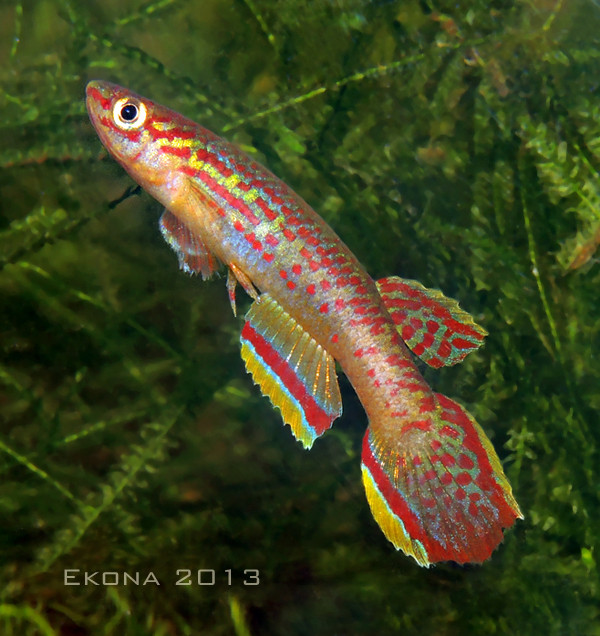 To my surprise a half-dozen A. calliurum fry appeared in with the growing out cichlids...here is one of the F1 males at ~ 20mm (.75 inches) already showing good form and color.
I thought all the fry of this species were males, but I lucked out - there is a female as well. I will keep these gems going. 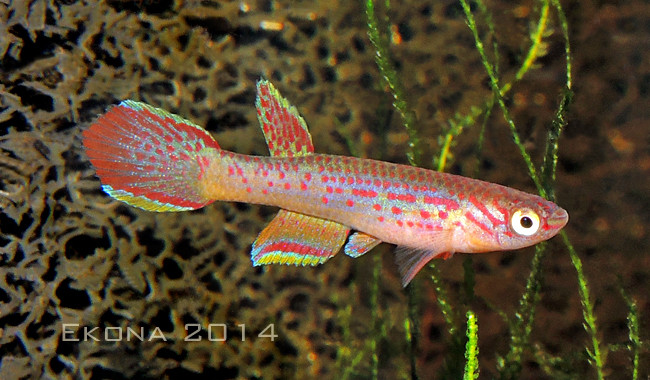 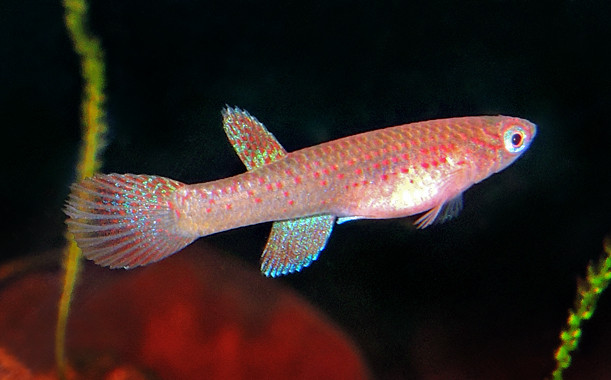 These guys are growing out really nicely - a gem of a fish! Alpha F1 male. 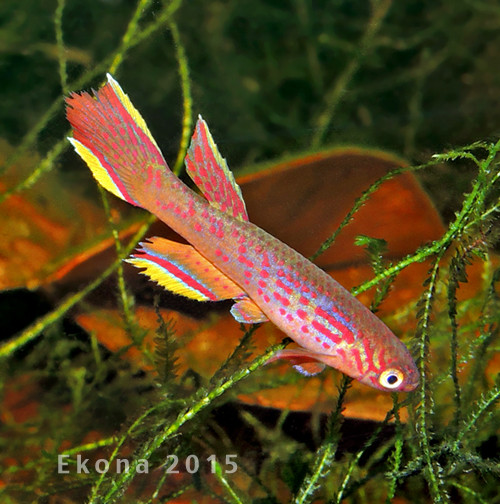 What kind of moss is that on this last pic??? Fontinalis ??

I`m asking because I bought myself a small bag of Fontinalis antipyretica on an auction today!! (3 Euro!)

What are your water parameters and light situation in that tank??

What kind of moss is that on this last pic??? Fontinalis ??

I`m asking because I bought myself a small bag of Fontinalis antipyretica on an auction today!! (3 Euro!)

What are your water parameters and light situation in that tank??
Click to expand...

Hi Micke,
Thanks for you comments and like .
Sounds like a good deal on the moss.
The moss in my tank is "java moss" but who knows what species? - but definitely not F. antipyretica, which has much larger leaves than java moss. The leaves may appear large in the photo - but in reality they are normal (small size) as the fish is still only about 2.5cm in length! This species colors up very nicely at a small size.
The lighting in compact flourescent 28watt bulb and the water parameters are:
Temp 23 C
TDS 150 ppm
pH ~ 7.5 (a little high due to lots of plants in the tank)
Nitrates <5 ppm
Alder cones, hardwood leaves and java moss and a layer of floating plants are in the tank.

Hi all,
It looks like it could be the true Java moss <(Taxiphyllum barbieri)>, mainly because of the relatively long "stem" sections between branches (picture below from <aquamoss.net>).

Taxiphyllum barbieri doesn't ever produce spore capsules, so you would need to look at the "leaf" (microphyll) cell shape ("narrow and oblong") under a microscope.

Good and intresting info from your part as always..!!
Have a look at my new Fontinalis thread too..( The Planted Aquarium )... maybe you can help me out there as well??
I will have a look at the aquamoss website..

I thought you had a "low pH tank" Ekona....
It gives me hope to achieve some great results with my own killi tanks.. without dropping the pH a lot..

dw1305 said:
Hi all,
It looks like it could be the true Java moss <(Taxiphyllum barbieri)>, mainly because of the relatively long "stem" sections between branches (picture below from <aquamoss.net>).
Click to expand...

Ah - ha, there is a botanist in the house !. Great info, and thanks for the links - I'll try to get better photos of the moss I have - very long strands with few branching side fronds. Very interesting info on the hx of the taxonomy of Java Moss.

jumpmaster said:
Their body shape is similar to my dwarf golden panchax
Click to expand...

I agree Jumpmaster.. they look quite similar .., But I think of the Dwarf Golden Panchax(from Asia) , more closely related to the Epiplatys species of Africa...
A real surface living fish!! A specialist!! Add insects to their diet and you will see!!!

My Epiplatys species usually jumps up on to the glass above the surface to collect froozen food leftovers!!

IMO ..the Dwarf Golden Panchax or Epiplatys are perfect species to keep together with larger Apistos in pH 6-7 ..at least in long/larger planted tanks !!

Ekona said:
Ah - ha, there is a botanist in the house
Click to expand...

That was my under-graduate degree.

Excellent - mine was Wild Life Management with botany and ichthyology classes.

A few photos of the possible Taxiphyllum barbieri in my tanks. Not sure if this helps with ID without a microphotograph of the microphyll cells. 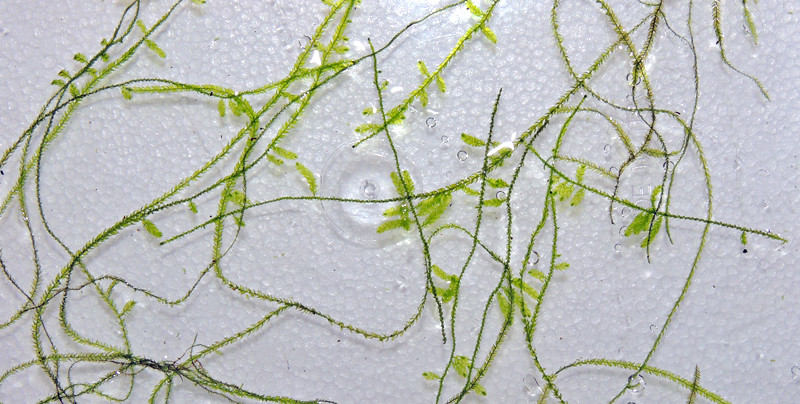 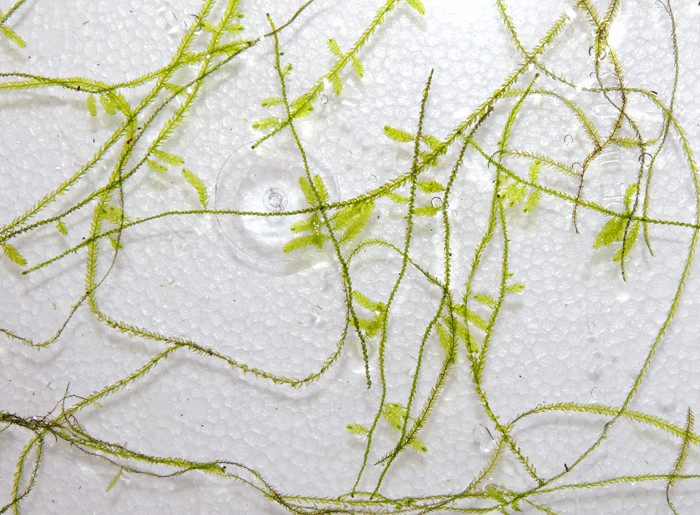 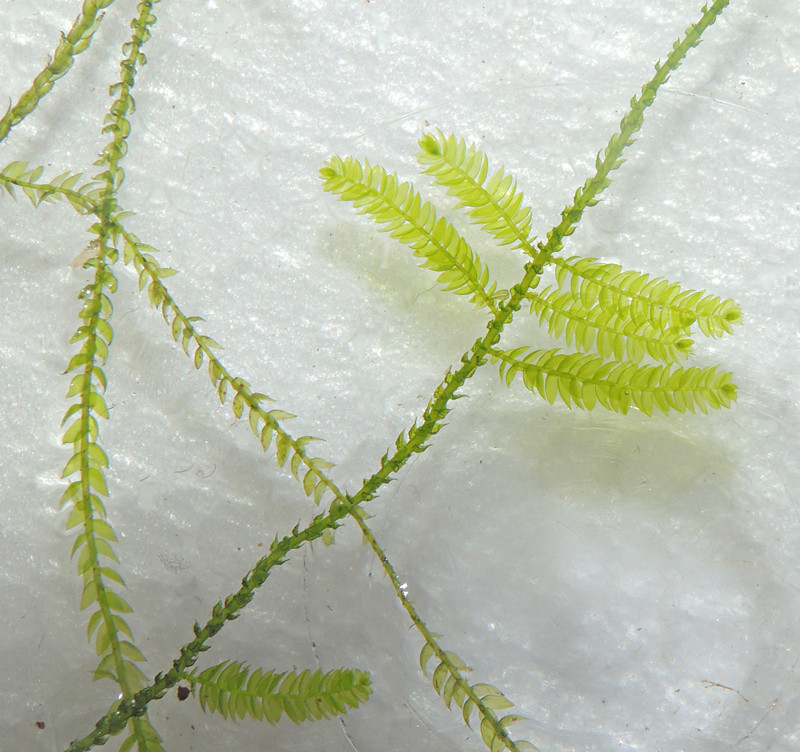 I picked up this interesting algae at the LFS where it grows randomly in their tanks. It reminds me of a ragged marimo ball, as it forms loose rounded clumps of about 2.5 - 3.0 cm. It tends to attach to objects (in this case pea-sized gravel) by a very small attachment point and then branch out from there to form the rounded mass. It has a very green color and I'm thinking it would make great spawning sites for small egg-layers if it were to become well established in a tank. I'm going to be really careful about not spreading it around, but to keep in maintained in a single aquarium to see how it does.

Anyone care to take a crack at what genus/species this might be. It could be really common, but I have never seen it before.
Last edited: Feb 13, 2015

Ekona said:
Anyone care to take a crack at what genus/species this might be.
Click to expand...

Looking at the branching I think you are right and the algae may be a Cladophora species. The easiest way to tell would be by touch, Cladophora is quite tough and "gritty" <http://www.micrographia.com/specbiol/alg/filamen/fila0200.htm>.

Ekona said:
A few photos of the possible Taxiphyllum barbieri in my tanks. Not sure if this helps with ID without a microphotograph of the microphyll cells.
Click to expand...

Thanks, Darrel, and yes, I agree, a Cladophora species. I am familiar with a common Cladophora that grows in waterways around where I live - but that kind grows in large clumps (at times up to, say, 1 foot or more) and grows filaments much, much longer compared to the form pictured above. I've observed the smaller growing form in the mentioned dealer's tanks for years and it never forms any clumps larger than the 2.5-3.0cm clumps as above. Also I would not consider it the grey-black "beard algae" that is frequently seen attached to objects/plants in aquaria. As I say, I've never seen this "ragged mario ball" form anywhere before, although it may be common in other's aquaria etc. I felt it and it feels slightly "gritty", but not nearly as gritty at the long-filamented, large clumping Cladophora I've frequently encountered in the field around here. I've tried large clumping form in aquaria yeas ago, but it easily breaks up and free-floats around - not an appealing situation for an aquarium IMO. The smaller form appears to maintain itself in small clumps (similar to Marimo balls) and that is what I like about it. An interesting species.

I felt the "Java Moss" in my tanks and if feels rather wiry, but that is subjective and I'm not sure if I could locate actual Vesicularia to compare it to - but I will be on the look out for Vesicularia ssp. to try a comparison.

Hi all,
These are a couple of mosses I had a while ago, I scanned them to try and get them Id'ed, but with out any real success.

cheers Darrel
You must log in or register to reply here.

J
Are my apistos breeding?

C
My joy on finding Apistogramma's

Do you still have Apistogramma diplotaenia pairs available to sell? Please advise. Thanks.

Apistomaster anewbie Apistomaster wrote on anewbie's profile.
I see that The Wet Spot Tropical Fish currently has the fire red A. agassizi you are looking for. Here is the link:

www.wetspottropicalfish.com
I've always had good experiences buying from them on line.
Jul 27, 2022 •••

Hanzle
Hallo,
I am Hanzle from Holland and keep apistoos for 40 years. Had my own aquarium shop from 1984 till 1988. Always s great fan from apistoos and hyphessobrycon which is s great combination in a Community Aquarium. Perhaps.....in the near future I start breeding apistoos again. Have a 400 liters Community aquarium for hyphessobrycon wadai and apistogramma biteaniata.
Feb 7, 2022 •••
E
Eugene09
I want to get a 55 gallon slightly planted tank with many caves and I am thinking of getting 2 electric blue acaras, 3 blue rams, a apistogramma, 3 angelfish, and some corrydoras. Will that work if I keep the temperature at about and 80 or less?
Jan 3, 2022 •••
Top